We are re-opening! Please read our COVID-19 Statement to learn more about how we are keeping our patients safe!


Herald Square Chiropractic and Sport follows a long history of Gonstead Clinics dating back to 1923. Since then, the Gonstead System of Chiropractic has maintained its superb standard of chiropractic across the world and is arguably the ultimate “Gold Standard” in hands on chiropractic spinal and extremity adjusting. and is the leader in Chiropractic techniques due to the lengthy training a Gonstead Doctor receives. A Gonstead Doctor not only completes a 4 year Doctorate degree in Chiropractic like every other Chiropractor, but also receives additional post-graduate training by attending several seminars every year to  maintain his or her standards. 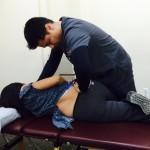 Dr. C.S. Gonstead, known as the “Chiropractor’s chiropractor,” (1898-1978) developed the Gonstead technique. He used his background in mechanical engineering and knowledge of the nervous system to develop a specific, thorough, definite approach of analysis to every segment of the spine. Analysis includes instrumentation, digital palpation, motion palpation, visualization and x-ray.

Chiropractic care goes far beyond a simple system of “putting vertebrae back in place” at the Gonstead Clinic. It is rather, a scientific program of carefully analyzing the patient and their health problems on the basis of available information and then deciding on the proper corrective steps.

The Gonstead adjustment is given with care and specificity; only the problem areas of the spine are addressed. 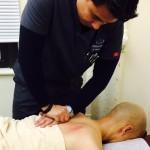 The specific adjustment(s) which is a high-velocity low force thrust helps return the spinal joints to their proper position and motion resulting in proper nerve functioning and improved health.

Patients of the center experience comprehensive chiropractic care from board certified physicians. Their muscle and soft tissue therapy go beyond alignment of joints to solve problems within the muscle fibers themselves such as myofascial adhesions - knots where muscles and skin bunch up also called trigger points.

Services begin with examination and evaluation to determine the cause of primary complaints. Other services include corrective rehabilitation and exercise which focus on posture, strengthening and muscle building. Their medical-grade massage therapy is perfect for sports injury recovery. Medical massage is another very effective option which is part of treatment programs at the practice. The physical therapists and physicians work together to provide each patient with the care and treatment they need to feel their best.

By correcting posture and strengthening muscles, patients who visit Herald Square Chiropractic and Sport can increase their flexibility and improve their overall health. This can help patients who visit the office avoid re-injuring themselves and also stay pain-free. Preventative and proactive health care are prime principals at Herald Square Chiropractic and Sports.  The goal here is always recovery, pain control, and prevention.

The practice welcomes all new patients and can work with various insurance providers and financial situations.

Listed are the major insurance providers we accept. For more information regarding specific plans, please call our office.

Words from our patients

Feel free to email us regarding any scheduling or general questions!